The Shahrizor plain is a wide valley in north-eastern Iraq at the border to Iran, which covers an area of approximately 50 ×25 km. In antiquity, as well as today, the plain was an important hub for traffic and trade along the Zagros and gave access to the Iranian highland. From the 2nd half of the 3rd millennium B.C. on, historical sources provide us with information about the region. Several Mesopotamian kings led campaigns to the area in order to acquire control over important trade routes and to gain access to raw materials. Despite these the kingdom of Simurrum was able to gain control over a wider region along the “Hurrian frontier” during the late 3rd millennium, presumably stretching from the Ranya plain in the north to the upper Diyala in the south. For reasons, which still remain obscure, this kingdom disappeared from the historical records before the middle of the 2nd millennium B.C. Later mentions of the region are scarce and the archaeological material became more heterogeneous than it had been before: while the cultures of the Early and Middle Bronze Ages in the Shahrizor plain had strong ties to the material and intellectual traditions of eastern Mesopotamia, the remains of the Late Bronze Age and Iron Age suggest stronger links to the material culture of western Iran and show stronger regional identities. 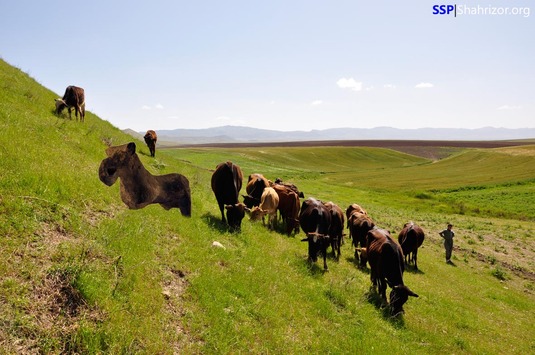 The Shahrizor Survey Project aims not only at the analysis of the multi-period settlement patterns in the Shahrizor plain, but also at a reconstruction of the cultural, economic and socio-political conditions. A major focus lies on a micro-regional exploration of environmental conditions and the human impact on landscape and climate by deforestation, animal husbandry, field-crop agriculture and the use of irrigation. The aim is to investigate these issues with a wide multidisciplinary approach including paleo-environmental, historiographical and -geographical research as an addition and supplement to the available archaeological record.

The Project is funded by the German Research Foundation (DFG).